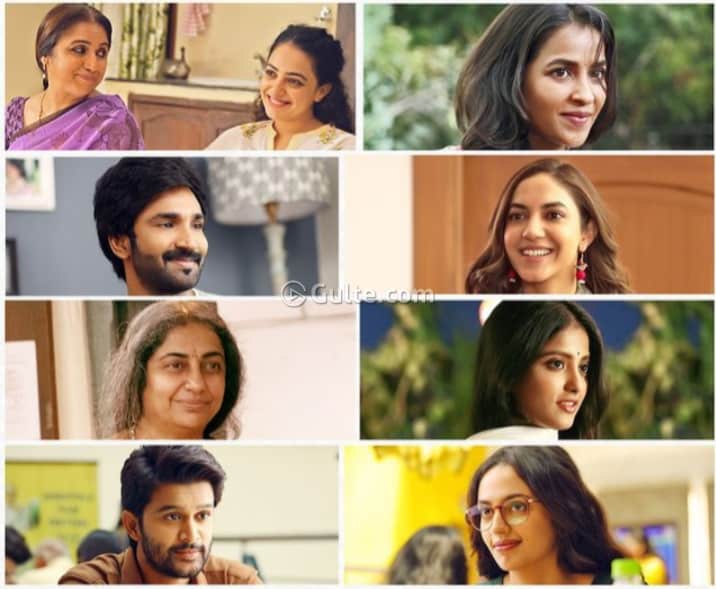 The new Telugu Amazon Original series is produced by well-acclaimed creator Elahe Hiptoola with Nagesh Kukunoor as the showrunner. Modern Love Hyderabad is the second edition of three localised and fictionalised versions of the international anthology helmed by John Carney, Modern Love.

Modern Love Hyderabad features a bouquet of six heart-warming stories that explore the various facets, shades, and emotions of love across myriad human relationships. The Hyderabad chapter of the international franchise, inspired by the popular New York Times column, presents unique, quintessential, and relatable stories of love that are rooted in the City of Pearls. This series attempts to tell a story about modern-day love and relationships, each with a unique story and with a deep, hidden message.

The first episode of the anthology, titled, “MY UNLIKELY PANDEMIC DREAM PARTNER,” directed by Nagesh Kukunoor and featuring Revathy and Nithya Menen, begins with Noori Hussain (played by Nithya Menen) in a surgery room, recalling her fight with her mom, Mehrunissa (played by Revathi), over her love marriage. Noori hates her mom’s ideologies over intercaste relationships and has some heated arguments. However, the mom-daughter duo gets stuck in the same house due to lockdown, and the flow of events brings them close and thus forms the story.

The second episode, titled “FUZZY, PURPLE AND FULL OF THORNS”, directed by Nagesh Kukunoor and featuring Aadhi Pinisetty and Ritu Verma, is a cute little love story between Uday Bhasker (played by Aadi Peneshetty) and Renuka (played by Ritu Verma). It’s all about modern day life in a live-in relationship and is sure to take you on a ride filled with smiles and hearts.

The third episode, titled “WHY DID SHE LEAVE ME THERE…?”, directed by Nagesh Kukunoor and starring Suhasini Maniratnam and Naresh Agastya, starts off with Ramulu (played by Mathu Vadalara, of Naresh Agastya fame), a CEO, giving a booster speech to his colleagues. This episode solely talks about the pure relationship between a young boy named Ramulu and his grandmother Rangamma (played by Suhasini). It starts off on a very slow note, and gets even slower as the episode continues, which is a turn off in this episode. While this episode intends to take the audience on an emotional ride, it fails to do so.

The fourth episode, titled, “WHAT CLOWN WROTE THIS SCRIPT!, directed by Uday Gurrala, featuring Abijeet Duddala and Malavika Nair, is the modern day relationship that Ashwin (played by Abhijeet) and Vandhana Bharadwaj aka Vinnie (played by Malavika) share. Vinnie is strong-headed and independent, and this shows what really happens behind the lens of any show.

The fifth episode, titled “ABOUT THAT RUSTLE IN THE BUSHES”, directed by Devika Bahudhanam, featuring Ulka Gupta and Naresh, is about the life of a girl (Ulka) with an overprotective father (Naresh) who is on the lookout for a perfect match for her. It is a simple with a clichéd storyline that one can easily guess what’s going to happen next.

The last but not the least, the sixth episode is “FINDING YOUR PENGUIN,” directed by Venkatesh Maha and featuring Komalee Prasad. It starts off in a science lab with Indu (played by Komalee Prasad) and her friends discussing a breakup. The story gets interesting when Indu decides to find her prince charming, with a twist. This tale will surely bring a smile on your face, taking you back to your college days and how ‘dumb’ you could be in a relationship. While in a subtle yet strong way, this also speaks of a key aspect of the importance and confusion involved in choosing your “right” partner. By the end of this episode, everyone will surely wish to have the father that Indu has.

Beginning with Suhasini, for an actor like her, performing for a character like Rangamma is nothing but a cake walk, while Naresh Agastya could’ve performed better in the space given to him, as we could not feel the real emotions they tried to show in that episode.

It seems like Komalee Prasad has no turning back after this series. She is unapologetic and unabashed, and her performance was no less than reality.

Nithya Menen and Revathi were as natural as one could ever get. They both did an excellent job with their roles, however, they fail to impress us as the real mom-daughter duo.

While Ulka and Abhijeet’s performances are okay, Malavika Nair steals the show, overpowering the former. The same goes with Aadi and Ritu, where Ritu, with her performance, outshines Aadi. They still look like the perfect onscreen lovebirds.

While this is a one-time watch series solely for its ensemble cast, the screenplay of the first and third episodes by Nagesh could have been a little better as it felt lagging in many areas. It is so slow that it’s no surprise if you doze off while watching those episodes. However, he manages to increase the pace with FUZZY, PURPLE AND FULL OF THORNS, as it is something the present generation of couples could relate to. Venkatesh Maha, Devika, and Uday delivered what was needed, but a little more strength in the story could’ve worked better. MM Keervani’s music gets extra brownie points, but it is again not something one will remember after switching to another app or another series.

Modern Love Hyderabad explores the joys, complications, tribulations, and healing power of love, but at a very slow pace that is sure to give you good sleep. The dialogues and background score in most of the episodes are like a lullaby. What we liked is that every episode shows an iconic place in Hyderabad. This series has a good story but failed to deliver the same on screen. Wise casting and modern-day relatable stories in a few episodes are the only good things about the show. In short, this is a mix of good and bad, with some episodes being feel-good that drop a smile on every modern day individual, while a few bore you to hell!

FINDING YOUR PENGUIN & FUZZY, PURPLE AND FULL OF THORNS, are two cute little stories that will put a smile on your face, while Malavika steals the show with her performance in WHAT CLOWN WROTE THIS SCRIPT!