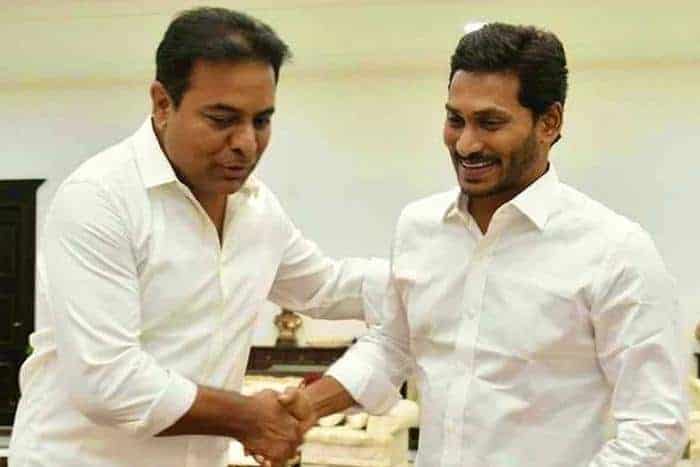 Having kicked up a storm by making derogatory remarks against the pitiful situation in the neighbouring state, hinting at Andhra Pradesh, in the morning, minister K.T. Rama Rao went into the damage control mode by midnight the same day.

Speaking at a CREDAI meet, KTR said that there was no power and drinking water facility in the neighbouring state. He said that one of his friends having some property in AP had apprised him of the bad roads and awful living conditions in that state having gone for celebrating Sankranthi. These comments on a public platform had in fact baffled the YCP leaders and political analysts.

He made the comments just to highlight that the living conditions in Hyderabad were much better than in many other cities and that the it was all due to the TRS rule. He even said that he was not exaggerating but that people can travel in a car and check the conditions there.

Soon the YCP social media wing swung into action and fumed at KTR for his criticism. One of the YCP ministers tried to counter the remarks in his own way but they seemed to lack weight and reason.

The TRS and YCP are known for their friendship, probably due to the saying that an enemy’s enemy is friend. Both the parties hate and have a common enemy in the TDP.

In the wake of such camaraderie and ahead of the Assembly elections when both the parties have to help each other in a big way, KTR took back his words by night and hailed Jagan’s governance. He tweeted: “It appears that an innocuous comment that I had made at a meeting earlier today may have caused some unintentional pain to my friends in AP. I enjoy a great brotherly equation with AP CM Jagan garu & wish that the state prospers under his leadership.”

However, senior political leaders and realtors said that such comments by KTR were unwarranted. It would have an impact on the real estate business in Andhra Pradesh, and it may lose prospective investors, they felt.