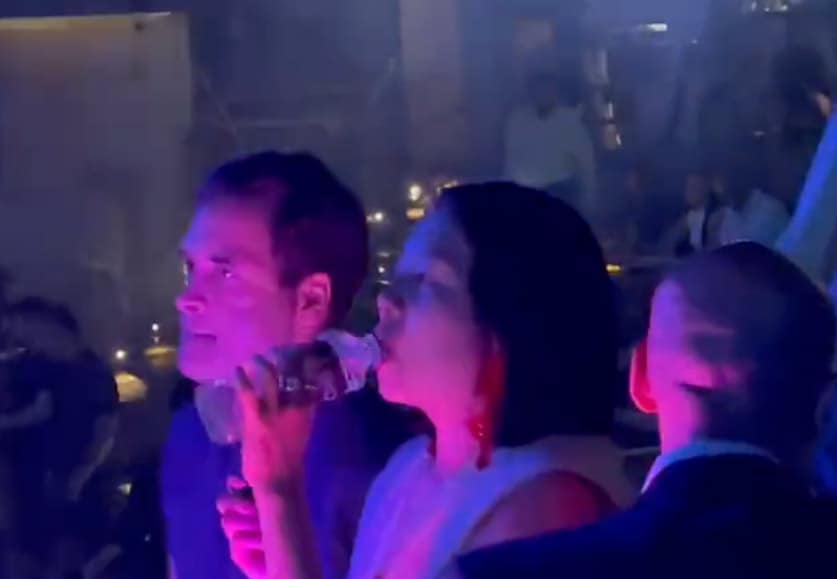 AICC former president Rahul Gandhi’s viral video showing him at a night club in conversation with a woman triggered a triade from the BJP. They lambasted RaGa for partying with friends even as the party is in a crisis and violence broke out in Jodhpur, Rajasthan, being ruled by the Congress.

The Congress and BJP had been at war on the social media since the video surfaced. The BJP questioned if it was right on the part of the Rahul Gandhi, aspiring to be the Prime Minister of a country, to party at night clubs.

Hitting out at the BJP, Congress leader BV Srinivas shared a picture of senior BJP leader and Rajya Sabha MP Prakash Javadekar popping a Champagne bottle at a party. The photo was shared with the caption: “pehchaan kaun (identify who)?”

Congress spokesperson Randeep Surjewala too jumped in defence of Rahul and said their party leader did not go to Pakistan PM’s house. He went to attend the wedding of his friend in Nepal, who also happens to be a journalist.

Rahul is on a five-day trip to Nepal to attend the wedding of his friend Sumnima Das, in the country’s capital. He was spotted at the night club, as some function was held there as part of the wedding.

The war of words on social media subsided only after the identity of the woman was confirmed. Das, daughter of former Nepal ambassador Bhim Udas, worked as the Delhi correspondent for CNN-International. She had reported about political, social, economic and environmental issues in the country. She also presented detailed reports about Nirbhaya case, crash of Malaysian plane, Commonwealth scams. She worked in CNN from 2001 to 2017. She covered the 2014 general elections in India.

From 2018, she had been working as the founder-executive director of Lumbini Museum. She completed her Masters in broadcast journalism from Oxford University. She also bagged the journalist of the year award in 2014. In 2012, she was chosen for the Cine Golden Eagle award for her story on slavery in rural India. Her marriage with Nima Martin Sherpa, CEO of SML Holding Group, is scheduled on May 5. He is a Nepali having his roots in China.