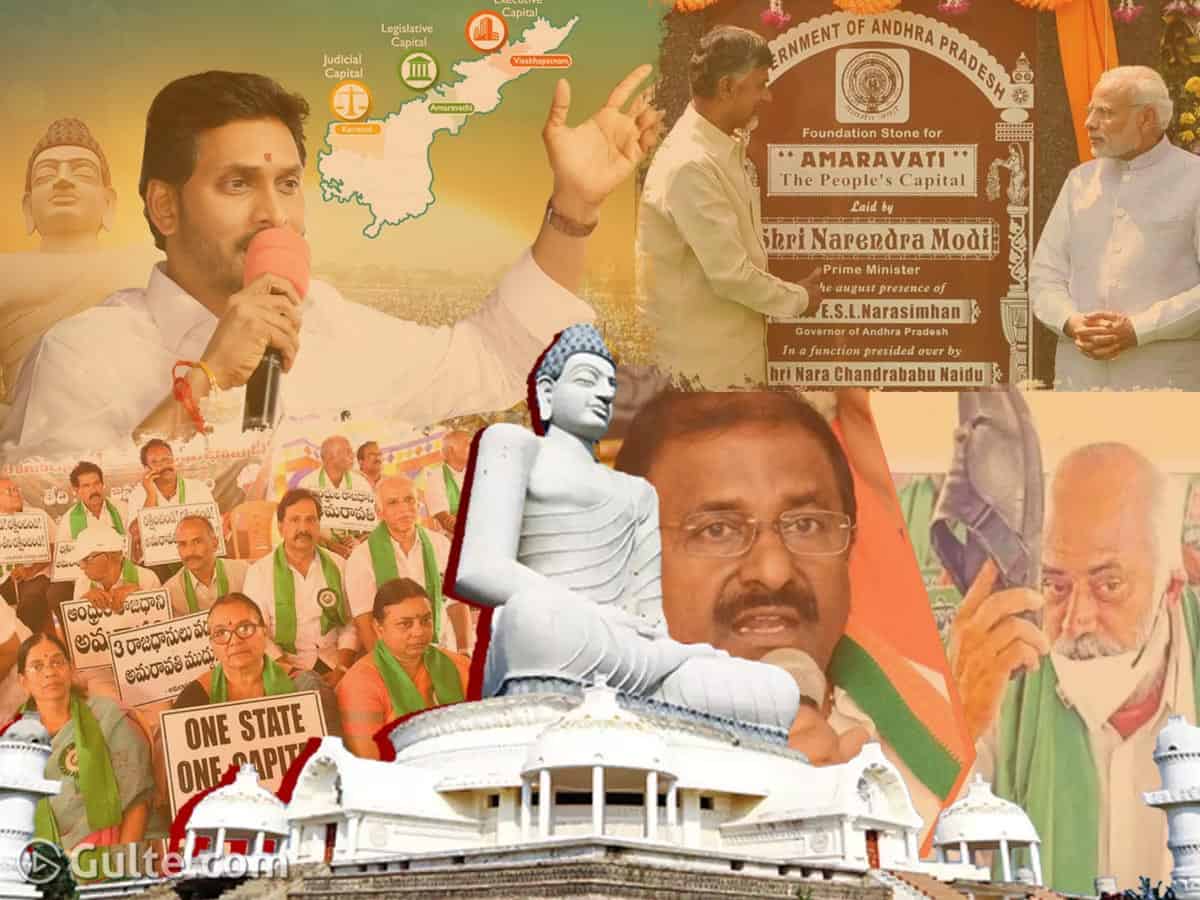 Andhra Pradesh Capital, Amaravati, has become a controversial and debatable topic after Chief Minister Y.S. Jagan Mohan Reddy decided to shift it to Vizag. From Day 1 of taking charge as the CM, he had been working on his hidden agenda of shifting the Capital to Vizag and making Amaravati a ghost city.

Though he and his ministers replied in the negative to queries from the scribes on the issue, in the initial days of coming to power, he had been eyeing his goal and trying to garner support to his proposal.

Finally, Jagan cleared confusion on it by making a statement that “there was a possibility of having 3 Capitals for the state” in the Assembly on December 17, 2019. Since then, the farmers who pooled their land for Amaravati have been on a warpath demanding that Amaravati should be the sole capital of AP.

In the public, the party leaders have been saying that they are with the farmers but in action, the BJP top leadership had even suspended party leaders if they gave statements in favour of the Amaravati farmers while taking part in debates of TV news channels.

One Turuaga Sriram, BJP leader from Vizag, was served showcause notices for speaking in favour of the farmers and hurt with the way the party was dealing with him, he quit the party.

One other BJP leader O.V. Ramana, who had written an opinion piece in a newspaper stressing the need to retain Amaravati as the Capital of AP, was suspended.

Gopala Krishna, during his visit to the hunger camp of the Capital region farmers at Mandadam village, as a mark of protest resorted to the footwear act. Krishna seems to be a man of conscience as the BJP, which had an alliance with the TDP in 2014 elections, was also one among the political parties in AP which agreed to the construction of the Capital in Amaravati. Even the YCP, which was in the opposition then, too agreed for the location of capital at Amaravati.

However, after the YCP coming to power, the BJP seems to be adopting double standards regarding the capital, while the YCP is hell bent of shifting it to Vizag.

It is being said that BJP MP Sujana Chowdary has been isolated by the party after the BJP and YCP ‘forged a secret deal’. YCP leaders believe that Sujana, though physically and technically in the BJP, is a covert of the TDP.

A few days ago, the BJP replaced party state chief Kanna Lakshminarayana with Somu Veerraju just because the former had been vocal in his support to the farmers.

Now, the farmers are raising questions over who should hit themselves with footwear. Is it Gopala Krishna or the BJP as a whole that should be feeling sorry for not being able to stand for the genuine cause of the farmers. Some others hailed Gopala Krishna for being brave and taking a pro-farmer stand.

Meanwhile, there is criticism against the Centre for not being clear in its affidavit over some issues. The affidavit stated that the central government had no role in deciding the capital of a state and that it was the prerogative of the state.

However, the BJP-led central government seems to be forgetting that the issue of capital in AP is related to the Reorganisation Act, 2014 and there is no mention of how many times could a state shift its capital. The TDP, in 2014, zeroed in on Amaravati and the Centre too notified it.

Now, after the change of guard in the state, there is talk about change in the capital, which leads to questions like “Can the capital be changed every time the CM changes?”

Similarly, there is no answer to questions on could the state trifurcate the capital. Political analysts are faulting the BJP for playing a double game with regard to the AP capital issue. In the public, the BJP leaders say they are against the concept of 3-capitals but when the issue came to the court, the BJP-led central government says capital is the prerogative of the state and that it does not fall under the central government’s purview.

It should also be remembered that Prime Minister Narendra Modi himself attended the groundbreaking ceremony of Amaravati and even promised to help AP build a capital of international standards.

Political observers say never had the BJP played such nasty game on any issue. The BJP had been upfront with regard to its stand in Ayodhya Ram Mandir, Article 370. They wonder why should BJP resort to such cheap politics.

Not just a name

In such a scenario, the Centre has every right to decide on the capitals of states and it can tell the YCP government to stall all attempts to shift the capital to Vizag but the BJP, with an ulterior motive to deal a blow to the TDP in AP, is supporting Jagan from behind the scenes.

By playing such type of double standard politics, the BJP cannot dream of winning in AP. In 2019, the BJP secured only 0.8% of votes and in 2024, the party leaders might even lose their deposits.

The villagers might even not allow the BJP leaders into the villages during campaigning for 2024 elections and it is the foolishness of the BJP leaders to think that the voters do not know about the BJP’s veiled support to YCP, which together are aiming at crush the TDP to death in AP.

What BJP Should Do?

It would be much better if the BJP takes a clear stand on Amaravati and stop playing a double game with the farmers of the capital region. No political party or individual would criticise the BJP if it comes clear on Amaravati stating strong reasons behind its stance.