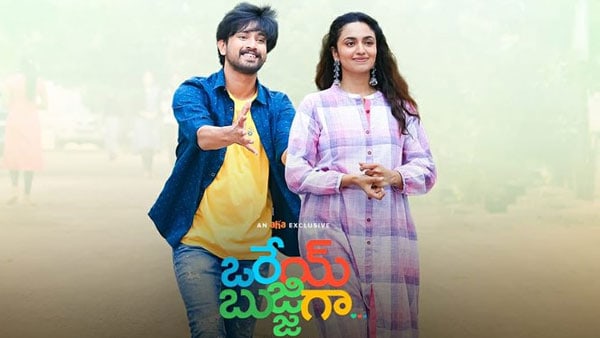 Orey Bujjiga is the latest Telugu film to directly drop on a streaming platform. Directed by Vijay Kumar Konda (Gunde Jaari Gallanthayyinde), it is a regular rom-com with a few laughs here and there. Raj Tarun and Malavika did their best, but couldn’t lift this film from mediocrity.

Bujjigadu (Raj Tarun) and Krishna Veni (Malavika), who belong to the same town, run away from their homes on the same day in the same train. Their parents and everyone in their town believe that they had eloped. They are introduced to each other in the train journey and also work on a start up project together. The film is all about when they get to know the true identity of each other.

Raj Tarun is good in a role where he needs to hide his true identity from the girl he loves. He did well in comedic sequences but looked out of place in action scenes. Malavika Nair is a fine actress and she is good and believable even in some of the bizarrely written scenes. Vani Viswanadh tries to bring that Vanisri vibe of the eighties Attha-Alludu movies. Naresh and Posani appeared in stereotypical father characters. Saptagiri has lengthy comedy episodes that didn’t create the desired impact.

Vijay Kumar Konda tried to recreate the magic of his debut film that had a charmingly entertaining plot. His attempt to create something on that line based on the ‘mistaken identity’ didn’t really work beyond a couple of scenes. He managed to keep things entertaining until the intermission point, but the second half turned out to be a slog. The plot is stretched beyond point where the so-called comedy scenes also seem tedious to watch.

Anup’s music is very ordinary with only Krishnaveni and the song rendered by Sid Sriram sounded okay. There’s nothing to rave about the production design or cinematography. It’s pretty standard. The film needed a lot of trimming as it dragged on and on in the second half. Production values are okay for a Raj Tarun starrer.

A comedy of errors that begins in an engaging fashion but loses steam too quickly. The first half is bearable despite some boring episodes here and there. However, the prolonged second half puts your patience to the test. Director Vijay Kumar Konda tried too hard to create humor with some forced comedy sequences involving Sapatagiri’s character. Purposefully hiding the identity of ‘Bujjigadu’ from Krishna Veni until the climax backfired big time as the director and writer failed to make it look convincing and logical.

The director has thrown in far too many cliches into the mix especially in the second half that makes it even tiresome to watch. His attempt to pull off something like Gunde Jaari Gallanthayyinde worked only at the beginning of the movie. He couldn’t create such a strong conflict between the characters to hold it till the end.

Hebah Patel’s character is a spoof on the infamous viral Srujana audio clip that also fails to click. There are many such attempts at humour that failed to land well. Climax is a mess with the hero making a sacrifice to save the heroine’s mother. Director could have avoided all such cliched stuff and should have worked out a better solution that sorts out the problems between the couple.

Orey Bujjiga has a few fun moments and a talented lead pair, but falls flat in the second half. OTT release is a boon while watching such lethargic films as the remote control will come in handy. Raj Tarun will need much better than movies like this to break his failure streak.