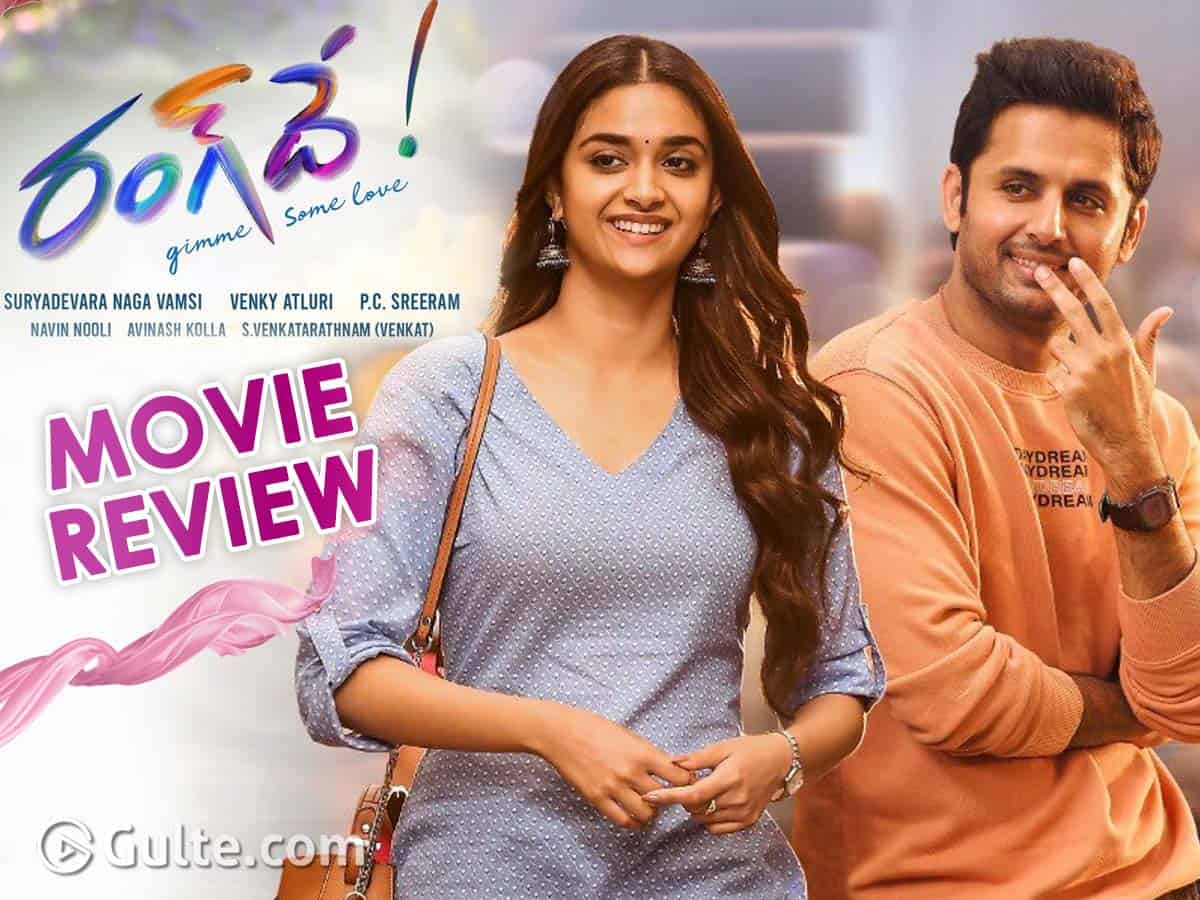 After his experiment with Chandrasekhar Yeleti – ‘Check’ – failed to make a mark, Nithiin pins hopes on Venky Atluri who came up with a romantic drama and has Keerthy as his pair. Has Rang De clicked?

Arjun (Nithiin) and Anu (Keerthy Suresh), neighbours-cum-childhood friends, end up marrying each other. While Anu loves Arjun, he doesn’t. He has his reasons for hating Anu. What leads to their unexpected marriage and how does it add up to their woes. The rest of the film is how Arjun and Anu overcome their tiffs and patch up.

Nithiin is good as a happy-go-lucky guy. His acting is as usual. He shines in some scenes. Often criticised for his dance moves, has improved his dance. Keerthy Suresh’s performance is the highlight of the film. In emotional scenes, she just excelled. Her role has layers. She is studious, an independent girl who questions her mother, yet she is a doting wife. The whole story revolves around Anu’s chracter and she does carry off the film on her shoulders. Vennela Kishore as Sastry is hilarious. After a gap, he is back with humour. Brahmaji is funny as an overseas education consultant. Scenes of him in the first half were laugh riot. Senior Naresh as usual gets it right. The equation he shares with son Nithiin is fun. Rohini as Keerthy’s mother delivers fine performance.

Venky Atluri, who made Tholi Prema and Mr Majnu, has done a neat job with Rang De. He managed to live up to the expectations one has on him. The writing is not great, but it serves the purpose. Screenplay is flat. Humour is the strength of Rang De. PC Sreeram’s camera work does magic. He makes the scenes look colourful. Devi Sri Prasad’s music works in portions. Naa Kanulu Yepudu song is impressive. Sid Sriram’s vocals gel with the song.

Rang De threads a familiar path. The film is a simple tale of a young couple and their relationship hurdles. It deals with love, hate, envy, jealousy and fun. The film has been shown in an entertaining way. This is where the film scores. The setting has been good. Initial portions are hilarious. Anu is strong in academics whereas Arjun is weak. This makes for fun scenes. These strike a chord with family audiences. The first half is filled with banter. The second half runs on emotion. The husband-wife equation is what the film revolves around. The screenplay is pretty flat. It could be better.

There are some routine scenes that give a routine touch. For instance, scene of a lecturer seeking sexual favour from Keerthy in the college and threatening with grades and marks could be better. Mana hero beating up him reminds us of an ordinary film which are done to death. Yet those are excusable. How does Arjun and Anu get close at a time they have decided to get separated? The family attachments are shown well. On the whole, it is a family entertainer laced with drama and humour. Rang De neither confuses nor mixes its genres. It just sticks to the point. It is a one-time watch.