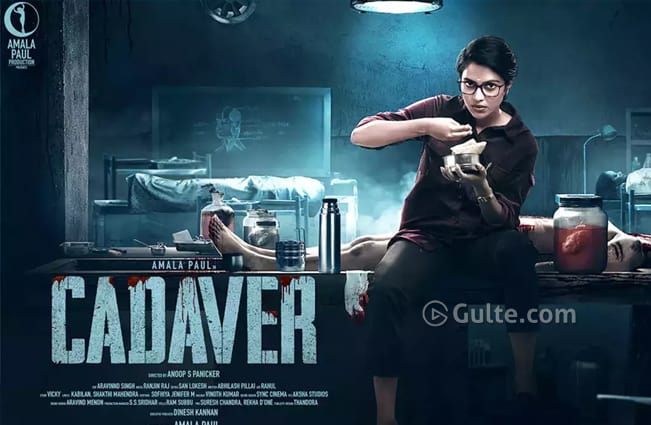 Investigative thrillers are always fun to watch if the screenplay keeps us guessing keeping the suspense alive throughout, in recent times the number of such movies has been increasing, and many worked wonderfully, Amala Paul’s recent movie is also an investigative thriller which is currently streaming on Disney+ Hotstar, let’s see whether the movie is engrossing or not.

The story deals with the investigation of a series of murders, handled by an assistant commissioner Vishal ( Harish Utthaman) and a pathologist, Bhadra (Amala Paul ), and there is a prisoner Vetri ( AditArun) who is indirectly involved in those crimes, what follows next is an investigative drama Intertwining these three people’s lives, who is Vetri, how is linked to all those murders is the suspense that movie takes us through till the end.

For a suspense thriller to work especially that of Investigative/ Procedural dramas, it must have solid twists, and the drama must be breathtaking, sadly ‘Cadaver’ didn’t get both rightly, the twists are outdated, and the drama feels over the top, almost as that of tv soap operas, ‘Cadaver’ could’ve worked if it’s been released in the ‘90s, now having seen umpteen exhilarating thrillers like Ratchasan, Memories, Drushyam, Yevaru, D16, across all south Indian languages, Our audience’s expectations/taste has been refined, and ‘Cadaver’ with its weak script couldn’t go anywhere near the above-mentioned thrillers.

Amala Paul tries her best to keep the proceedings alive with her subtle performance, but after a point, even she seems clueless. Her introduction marks the addition of a good nuance to her character’s profession “Pathologist”, the one who examines dead bodies, but the director just couldn’t get much more such scenes to make her stand out. There is a psychological attempt at the Pre-climax towards her character, but sadly we have already stopped rooting for her by that time, so the eerie/ overwhelming moment it offers doesn’t hit our emotional chords right. AditArun as Vetri was okay, despite his character being the key role, the way it’s been presented is half-baked, it struggles between scaring us and sympathizing with us. Harish Utthaman was good as assistant commissioner.

Director Anoop had a clearly poor script in his hands, and he directs it even worse, his amateurishness is clearly visible on the screen, in one or two scenes, he shows his command of the craft but for the rest of the movie, his vision and craft look dull and irritating. Anoop tries to narrate this investigative drama with too much exposition, I mean we know what we are seeing on screen, yet characters say “ this is this”, like why? Director spoonfed every little emotion/logic to us, this beats the engaging factor of the movie, I mean he doesn’t let us think.

Writing by Abhilash Pillai should also be blamed for this, his treatment of the key characters is so outdated, they’re so caricaturish, be it the prisoner, assistant commissioner, or Pathologist, he developed them without any in-depth characterizations, this takes us away from rooting the characters.
Had he worked a bit more on the development of characters, the output would’ve been better.

The music by Rajin Raj is average and so is the cinematography by Aravind Singh, at times color grading is utterly bad, Straight away they evoke short film feels, editing by San Lokesh is good.

Amala Paul in a few moments

Bottom-line: Overall, ‘Cadaver’ is a great misfire, it aimed for something and achieved something else, watch this if you have Nothing else on your watchlist.