Talk Of The Town: Jagan’s Gosala! 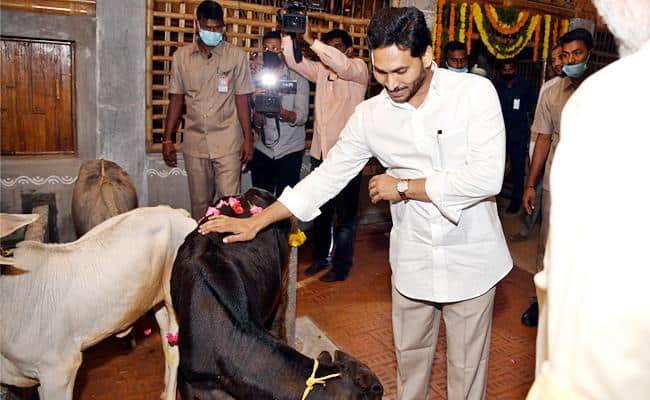 Chief Minister Y.S. Jagan Mohan Reddy has a new inclusion at his Tadepalli house. Reportedly, the CM directed for arranging a ‘Gosala’ on the premises with 6 cows brought from Tirupati.

Tirupati YCP MLA Chevireddy Bhaskar Reddy got the cows to Jagan’s Tadepalli house given the closeness he shares with the latter.

According to reports, Jagan’s wife Bharati performed puja to the cows before being shifted to the Gosala.

The YCP leaders are reportedly trying to understand the reason behind Jagan’s newfound love and discussing a lot about it. However, there is no official announcement made regarding the same but there is talk that Jagan’s guru Swarupananda Swamy of Sarada Peetham in Vizag could have directed him to arrange for the Gosala given the numerous issues, including political and financial, being faced by the YCP.

It may be recalled that Jagan visited Sarada Peetham last month. At that time, he visited the Guru at his Peetham and there were reports that the Swamiji directed him to have a ‘Gosala’.

The reports said that the Swamiji suggested Jagan to worship cows to overcome difficulties and controversies in the administration. There was talk that Jagan was advised to feed the bovines too.

Immediately, a shed came up in the backyard of Jagan’s house and the animals were shifted there. The ‘Gosala’ has been provided with all amenities and the YCP cadre is wondering how could Jagan believe in superstitious ideas like Go Seva .