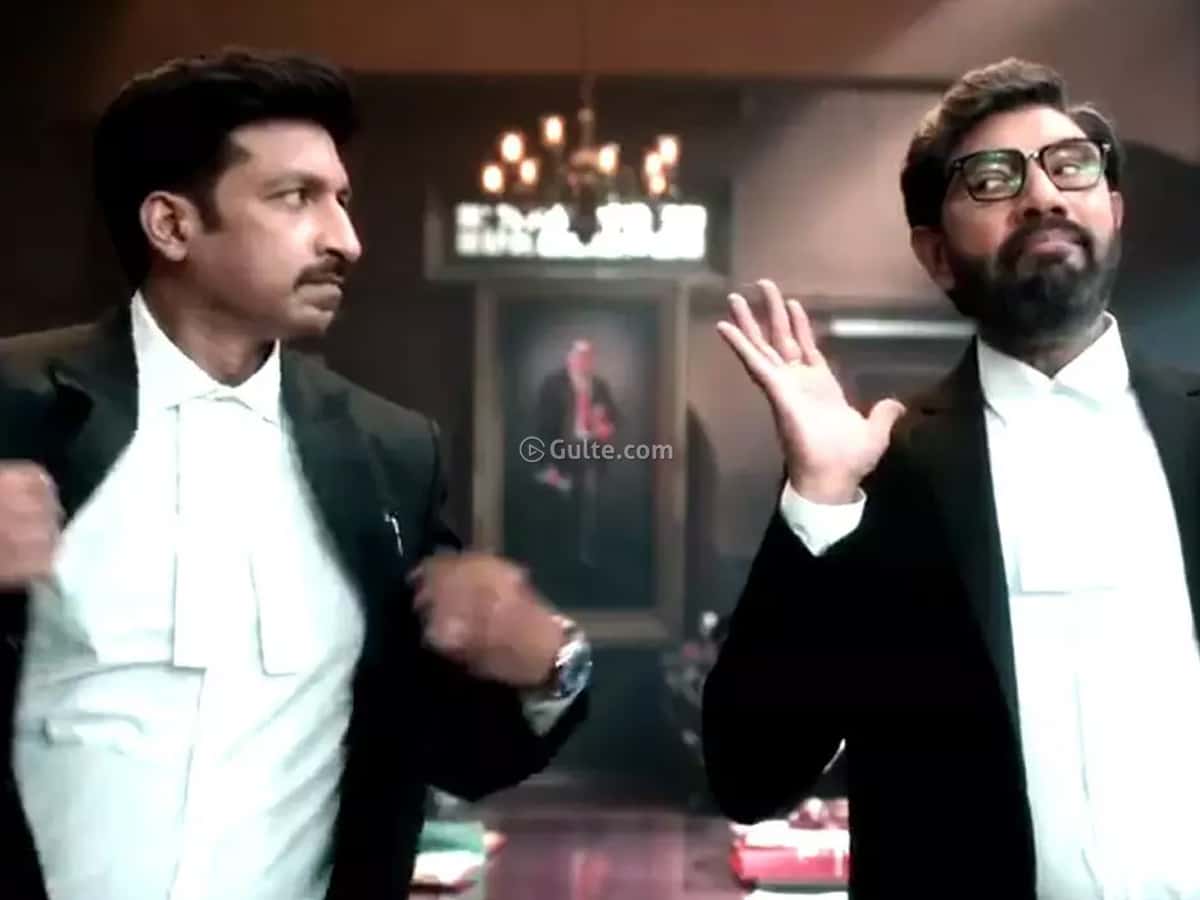 After Prathi Roju Pandage, Maruthi teamed up with Gopichand for Pakka Commercial which is bankrolled by two big banners UV Creations and GA2. The trailer of the film hinted at entertainment with commercial elements. Raashi Khanna is playing the female lead and Satya Raj along with Rao Ramesh fill the support and villainy parts. Well, the movie was released today in theaters, and here is the review.

Suryanarayana (Satyaraj) quits as a judge with the guilt of not able to deliver justice to a woman and pledges to not step into the court ever after. His son Lucky (Gopichand) grows up to become a pakka commercial lawyer, working exactly opposite to his father’s principles. The day comes when Lucky takes up a case to support Vivek Vardhan (Rao Ramesh), because of whom his father faces all the embarrassment and guilt in the past. The commercial son and non-commercial father lock their horns in the case and the story of Pakka Commercial is all about who wins it.

Gopichand looked snappy and trendy. He performed well as a self-centered and cunning commercial lawyer. He has touched the comedy side after a long time and he did fine with it.

Raashi Khanna looked beautiful and appears as a serial actress Sirisha who takes up the law to argue her own case against the soap serial producer. Her role appears mostly like an extension of her ‘Angel Aarna’ character in Maruthi’s film Prati Roju Pandage. Her role fails to entertain.

Sathyaraj is okay in the character. He gets crucial role but it is not properly etched. Rao Ramesh appears as the stylish villain, but it is not new to him. He has done these kinds of roles umpteen times and performed it like always.

Sapthagiri, Viva Harsha, Praveen, and others appear in comedy and supporting roles which has no prominence in the story. Varalakshmi Sarath Kumar appears in a name-sake role that leaves no impact.

Pakka Commercial is not a new one, but the farcical comedy makes it even mediocre. The screenplay and the cinematography are alright. The songs could have been better, but the picturizations are different and new. The director announced the dream sequence songs so to make them look not odd.

Director Maruthi made sure he saved some time for Sathya Raj which too a dream sequence. It was completely unnecessary and it looked like a sentiment he carried from Prati Roju Pandage.

The background music is just okay and most of them it has the theme music of Ilayaraja’s April 1 Vidudhala.

Director Maruthi, who usually prefers a variety of stories, came up with a routine commercial movie but with some padding of silly comedy that never work. Pakka Commercial is an age-old drama where the son takes up his father’s revenge but keeps it under the wraps until it is time. The hero’s characterisation has negative shades a la NTR – Puri Jagannadh’s Temper but fails miserably.

The hero is always on track towards achieving his ultimate goal. Eventually, he has to be on the right side and we just have to wait to see the way he chooses to lock the baddie. Here it goes for a toss.

Pakka Commercial is predictable right from the establishment shots in the very beginning until almost the end. The plot goes as per our guesses, the farcical and nonsensical comedy add to the woes. Director Maruthi fail to generate good comedy despite having a bunch of comedians.

The first half offers nearly nothing about the main plot, but some satires and instant comedy from Sapthagiri and Raashi Khanna.

The second half unravels the main story and the developments thereafter. The second half is also predictable in most parts. None of the twists and turns work. As the movie progresses towards end, it tests patience of viewers. Again, the revelation on why Gopichand has chosen the revenge path and the background for it is pretty obvious and the sentiment drama is outright boring.

The inflated serial drama of Raashi Khanna leaves the audience bored at some point. Raashi Khanna appears in a mass song in the second half and disappears until the rolling titles. Maruthi is known for over-the-top comedy, but Pakka Commercial goes over the board with the ridiculous comedy. Sathyaraj’s character which is crucial for film but director failed to make it work especially when he dons lawyer coat after 25 years.

At one point, we can relate to Gopichand’s dialogue with Raashi Khanna about her ‘overacting’. Also, the exaggerated comedy in some court scenes is so old and poor that makes the audience wish for a fast-forward button. In one of the court backdrop scenes, the director used a ‘duplicate suspect’ concept from the popular Netflix series Better Call Saul. Except for Gopichand and a few others, most of the main star cast is repeated from Maruthi’s last hit film Prathi Roju Pandage giving a nostalgic feel.

Among the comedy scenes that worked, the fight with the ‘Vetapalem’ batch from Krack on the beach could be remembered. All other scenes are easily forgettable. Director Maruthi tried to make a few scenes like a fusion of comedy and interaction where the characters in the film discuss the audience’s reactions, but that did not really work. None of the emotions work disconnecting viewers from the film.

Overall, Pakka Commercial is an outdated film in masala format that failed to entertain. It ends up as dated revenge saga.