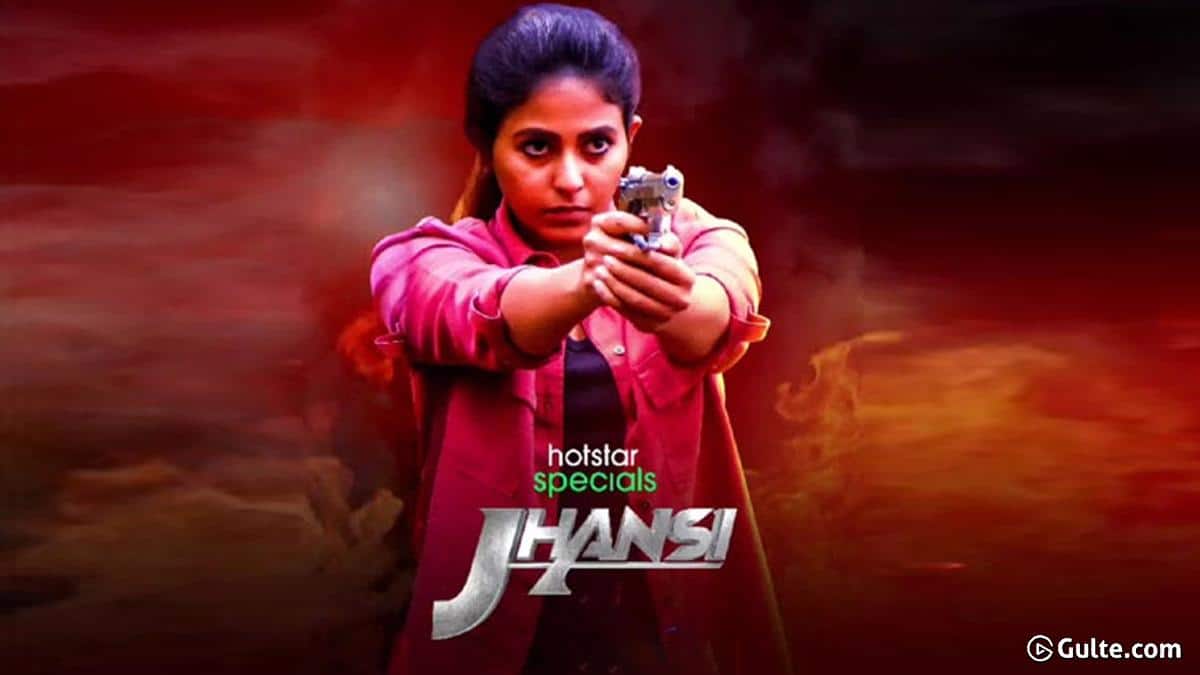 Talented Telugu heroine, Anjali plays the main lead in Hot Star’s new web series Jhansi. The web drama directed by Thiru is now streaming and has Aadarsh Balakrishna in a key role along with Chandni Chowdary. The series is a thriller with music by Sricharan Pakala.

Jhansi(Anjali) is an amnesia patient who lives with Sankeeth(Aadarsh Balakrishna) and his daughter. She has a troubled past and avoids marriage with Sankeeth for some reason. On the other hand, Jhansi keeps getting dreams where she is being troubled by unknown strangers. In a tragic turn around of event, Jhansi finds out that their dreams and real life have a connection and some goons are behind it. How does she handle all this alone is the story of Jhansi.

Anjali is a sincere actor and gets a solid role to showcase her talent. She as the victim with a troubled past is effective in the series. The entire show is based on her and Anjali does her best to keep the audience engaged. Her action sequences are also good. Aadarsh Balakrishna plays a small supporting role and he was effective too. Chandini Chowdary is also okay in her role but is not showcased well. Raj Arun and Samyukta Hornad were just okay in their roles but were also loud in a few scenes. Mumaith Khan was neat in her small role.

The series has good music by Sricharan Pakala. Even the ordinary scenes get highlighted with his score. The camera work by Arvi is good and the locations chosen look realistic. The editing could have been better as a few scenes related to Anjali’s past are dragged for no reason. For every thriller to click, the screenplay needs to be gripping but that does not happen in Jhansi. The writing is effective but the narration and screenplay play a spoil sport.

Jhansi deals with sensitive issues of child abuse, trafficking, sexuality to name a few. The show is about a central character played by Jhansi who is trying to connect dots from her past through some random images which are not clear in her mind. So, the setup and backdrop look intense and have been set up accordingly. But it is the screenplay which does not allow you to soak into the world of Jhansi. The narration is half baked and the scenes do not create much of an impact.

The manner in which the trafficking mafia is showcased looks a bit over the top. It is the supporting cast which does not create much depth to the proceedings. There are subplots which are not handled properly and feel like speed breakers in the show. The female centric angle of women empowerment is also not convincing enough in the show. The show starts on a positive note but from there on, the rest of the episodes are dull.

Jhansi is directed by Thiru and his narration is immature to say the least. Just to fill the episodes, he adds so many unnecessary scenes in the second and third episodes which bore the audience. The series is riddled with logical errors and the way the cops angle is showcased is sheer over the top. There are no hard hitting moments in the show even though Anjali tries hard to win the audience with her performance.

There are characters which are key to the show but they are not handled properly. Chandini Chowdary’s role is a misfit and is not etched properly. There are so many such issues which do not fit well into the narrative making this series bland. What could have been a nail biting thriller is spoiled by ameture screenplay and shoddy direction.