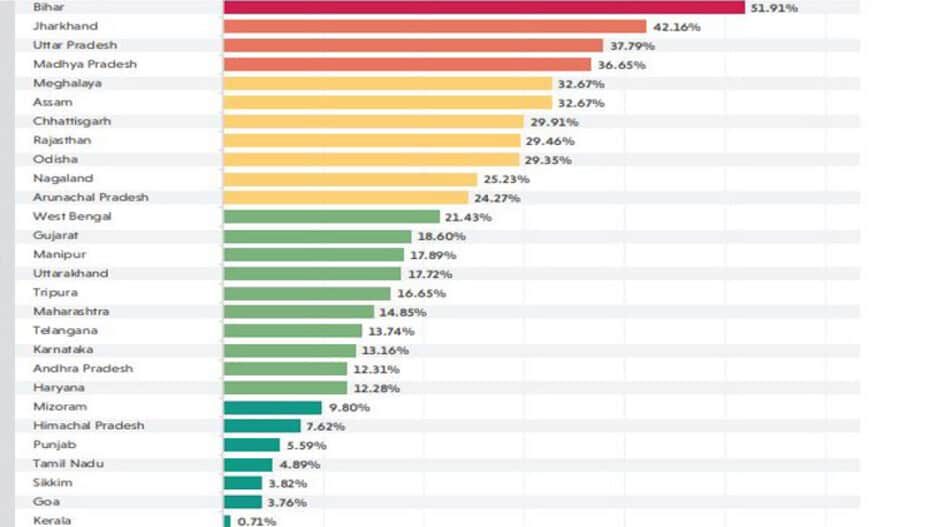 In complete contrast to the claim of the YCP leaders in Andhra Pradesh that their government strove for the wellbeing of the underprivileged and marginalized sections of the society by reaching out to them through various welfare schemes, Andhra Pradesh stood at the 20th position in the National Multidimensional Poverty Index (MPI) with 12.31 per cent poor population.

The Niti Aayog released the MPI report based on the National Family Health Survey-4 (2015-16).

According to the report, India’s national MPI measure goes by the globally accepted and robust methodology developed by the Oxford Poverty and Human Development Initiative (OPHI) and the United Nations Development Programme (UNDP). The MPI measure is based on multiple and simultaneous deprivations faced by households across health, education and living standards.

Compared to neighbouring Telangana which stood at the 18th position with 13.74 per cent of poor population, Andhra Pradesh fared a little better in the MPI.

Among the five southern states, AP stood third whereas Kerala stood at the bottom with just 0.74 per cent poor population.

In the MPI of Andhra Pradesh, Kurnool district topped the chart with 20.69 per cent of poor people followed by Vizianagaram (19%) while Guntur stood at the bottom of the 13 districts with just 8.31 per cent poor people.

The MPI includes multiple and simultaneous deprivations faced by households across the three macro dimensions of health, education and living standards.

The YCP government has been iterating that it is focusing on improving education and health of the citizens by implementing various schemes like Amma Vodi, Jagananna Vidya Deevena, Vasati Deevena, Aarogya Sri, etc. but more is yet to be done to get tangible results, feel officials.