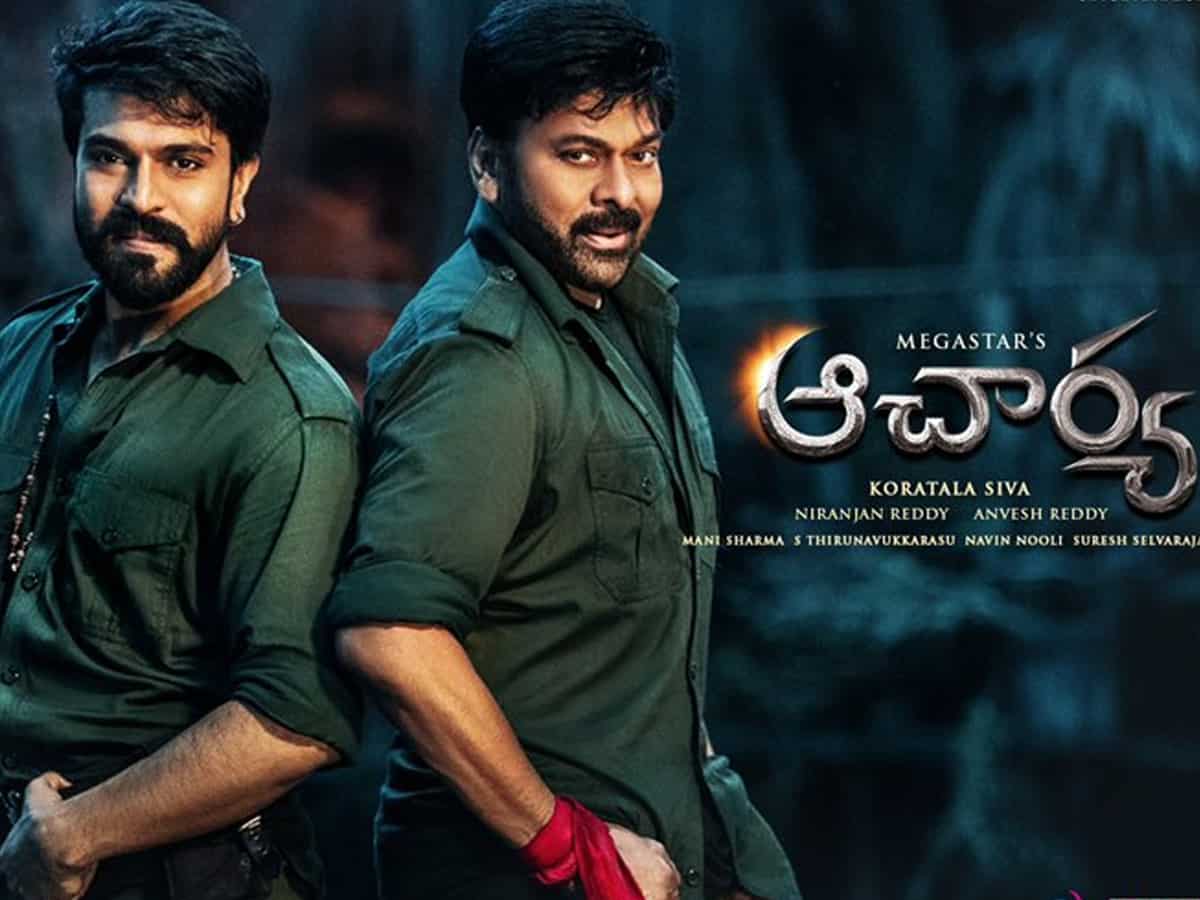 Megastar Chiranjeevi is coming back to the theaters with his Acharya directed by Koratala Siva. Chiru’s last outing was in 2019 with Sye Raa. Acharya is one of the most awaited movies due to the presence of Chiranjeevi of course, but also Ram Charan plays a crucial and lengthy role in the movie. The trailer appears to serve mostly commercial elements with two superstars in it becoming the saviors of a temple town. The movie was finally released today and here is the review from the US Premieres.

A temple town Dharmasthali loses its glory after Basava (Sonu Sood) takes it into his clutches. Acharya (Chiranjeevi) enters Dharmasthali and starts reforming it slowly with his silent yet violent acts. Acharya had to come to save Dharmasthali for a reason and that is Siddha (Ram Charan). Who is Siddha and how he is related to Acharya? What is Acharya’s background and how did he solve the problem of Dharmasthali? Acharya’s story answers all these questions.

Chiranjeevi is good as Acharya, but his story fails to create much impact and depth. Neither his character gets a strong presentation in Dharmasthali. Two fights where he becomes a vigilante trying to elevate but ends up in vain. His dances are still great to watch and that is the saving part of almost all the songs. Chiranjeevi’s role is monotonous and the Megastar gets nothing much really to perform here.

Ram Charan’s role is much hyped right from the first half but his role too is extremely formulaic and mostly predictable. The actor must have gone by the direction, but his role could not entertain much. With slow and predictable narration, both the Mega heroes’ roles look dull and routine Both their characters lack a strong emotional connection with Dharmasthali/Paadaghattam sentiments.

The graceful dances of both Chiru and Charan in the Bhale Banjara song remain a treat to watch. The song looks interesting and attractive just because they both dance in perfect sync.

Pooja Hegde has got a minuscule role and she mostly appears as a guest. With Chiru having no heroine, Pooja Hegde is there just to fill the gap as Charan’s love interest.

Sonu Sood, Jishu Sen Gupta, Tanikella Bharani, and others are fine, though they are all given the same old roles they have played umpteen times. Satya Dev appears in a guest role and he is alright.

Acharya is a routine plot with weak narration. The flow of scenes could be predicted by their most old-fashioned ways.

The graphics work in the movie is not great and could have been a lot better with the star cast like Chiranjeevi and Ram Charan in it. The screenplay is outdated.

The background music is alright and the songs are good to watch mostly due to Chiru and Charan in them. The dialogues are ordinary.

The senior heroes like Chiranjeevi have reached a point where they are becoming very protective of themselves during the story selection and often coming up with the same ‘safe’ stories with so-called commercial elements included. Acharya ends up as one of the routine storylines with predictable scenes all along.

The director gives a new backdrop with terms like Dharmasthali, and Paadaghattam and introduces the savior of them, Acharya to us. But took no time to fall back into the regular routine masala formula of a commercially viable movie.

The first half starts at a slow pace with an Intriguing voiceover by Mahesh Babu, but the pace doesn’t pick up even after Chiranjeevi enters. The most needed highlights and highs with his entry thereafter go missing. The scenes can be easily predictable. Though Chiru’s dance is good to watch, the songs Laahe Laahe and Saana Kashtam appear obviously forced.

With Chiru giving hints about his mission in Dharmasthali and about Siddha, it is clearly evident that the second half is all about Siddha. While the most hyped Siddha too goes in a vintage narrative of a rescuer or a savior. Ram Charan and Pooja Hegde’s love story and the song followed by those scenes are extremely boring.

The villains Sonu Sood, Jishu Sen Gupta, and his brother are just the same villains we have watched in many films who worry mainly about mining and encroaching. At least the villain’s methods of troubling the good folks don’t change here, like adulterating the medicines of Paadaghattam people, etc. On top of that, the three villains sound the same, maybe due to the usage of the same dubbing voice for all Bollywood villains.

There are many other outdated scenes like punishing a rapist, saving a girl from bad youngsters, saving the young boys from the quarry work and these come as a part of elevating the heroism. The scenes like Basava brutally killing a sincere officer, backstabbing Siddha, and supplying the drugs for the youth, are as old as mountains.

The Acharya himself stays mostly as a spectator in the second half just to watch Siddha take over, again with the same vintage formulaic scenes and elevations. Some combination scenes between Charan and Chiru turned out just okay, while their comedy at the quarry fails miserably. The climax fight is red and violent with Acharya in destruction mode, which might enthrall some action fans.

Having said that, Acharya is an outdated drama with some enjoyable dances and many predictable scenes. The presence of Mega heroes Chiru and Charan may not be able to help the movie, as the story and the narrative are much bigger villains here.

Bottomline: A Boring Class From Acharya