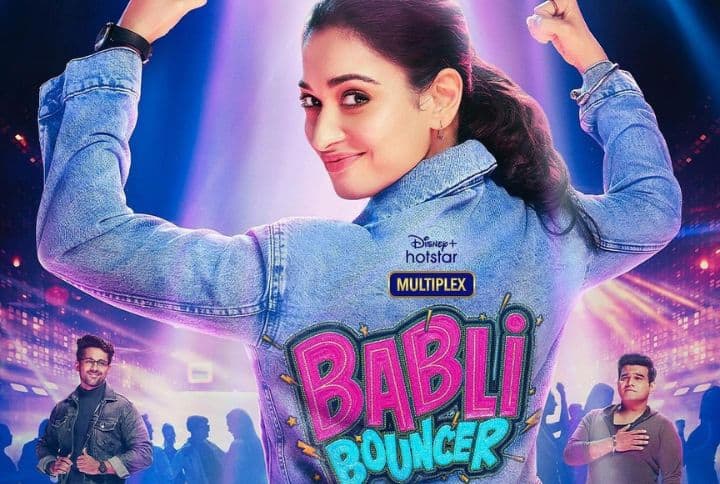 Tamannah Bhatia, who is doing films in multiple languages has now done a Hindi film after a long time. Tilted Babli Bouncer, the film has been directed by award winning filmmaker Madhur Bhandakar. The film is now streaming on Disney Hotstar.

Babli Tanwar(Tamannah) is a school drop out who roams around like a tomboy in Fatehpur. Her life funda is simple. She wants to have fun and get married and settle down. But things change for her when she lands up a job as a lady bouncer in a Dehi nightclub. In this process, she also meets Viraj (Abhishek Bajaj) whom she plans to marry. Will Viraj accept the new and enraged Babli? and how the drama unfolds in a women’s point of view is the basic crux of the film.

Tamannah who is known as the milky beauty takes a U-turn and attempts a role which is tomboyish. She speaks loud, fights with boys and has a wicked sense of humor. All these aspects have been ably elevated by the star heroine. The special aspect of her performance is that Tamannah gets the rural lingo on point. Shahid Vaid is adequate and Saurabh Shukla has done a wonderful job in his meaningful role.

Madhur Bhandarkar directs this film and he has set the film ably in the bylanes of rural India. The casting is right and the visuals nicely capture the realistic lifestyle of the village and nightlife in Delhi. The dialogues written are hilarious and those Tamannah mouths are full on comical. The music by Tanishk Bagchi and Karan Malhotra is just average and could have been better. The editing is not that great and the screenplay does not hold your attention. The story is old and has been narrated from a female’s point of view.

Award winning director, Madhur Bhandarkar makes a comeback after a long gap and one can say that Babli Bouncer is his weakest film to date. It might sound harsh but it is the sad reality. His screenplay is shoddy as not one scene in the film impresses. Tamannah tries hard with her performance but the other factors like drama, emotions, and twists do not engage the audience.

There is absolutely no freshness in the plot and the narration looks jaded. The film takes forever to enter its main plot and only Tamannah’s fun life is highlighted. Also, each one of the supporting characters is a stereotype who has been thrown into the mix to trigger contrived turning points in Babli’s journey.

Better scripting from Bhandarkar might have helped them find more significant spaces in the narrative. The film tries hard to evoke comedy and it looks over the top after a while. The film lacks seriousness at crucial points and goes on and on for no reason. The character of Tamannah is also not justified properly by Madhur Bhandakar. She looks fun but has no goals and feels like it is created just to show the story idea just from a female perspective.

In a way, Babli Bouncer is typical Bollywood fare that takes a promising plot and turns it into a tedious narrative stuck in a loop all the way until its very boring and predictable end.

Bottom Line – Over the top and predictable