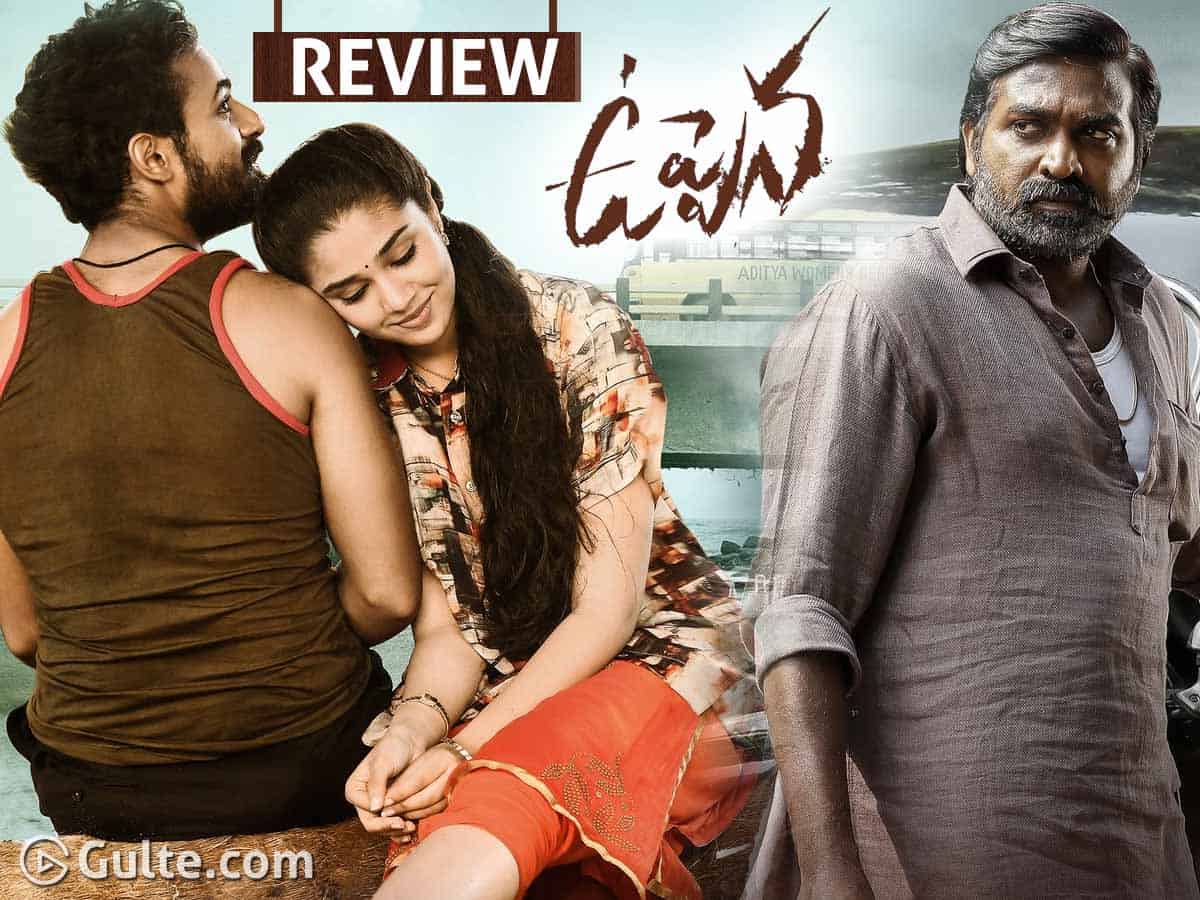 Uppena marks the debut of actors Panja Vaisshnav Tej and Krithi Shetty. It also launches Sukumar’s assistant Buchi Babu Sana as the director. The film has been making quite noise. Despite the debutant trio, the film’s high budget, big names in the behind, technicians like Devi Sri Prasad are the strong pillars for the film. All these brought huge hype around the film. Has Uppena met the massive expectations it’s carrying?

Aasi (Vaisshnav Tej) is a fisher boy who loves Bebamma aka Sangeetha (Krithi Shetty) right from childhood. However, Aasi shies away in expressing his love for her. Bebamma is guarded by his cruel father Rayanam (Vijay Sethupathi) and his henchmen. Rayanam is busy with his business and leaves family to the last. Though he is a doting father, he is more concerned about his honour, reputation. Whereas Bebamma is impressed with Aasi at first sight. However, the touch, physical intimacy between the duo develops feelings between the duo and makes their bond stronger. In no time, Aasi and Bebamma fall in love and get deeply connected. Rayanam gets to know about it. How does Rayanam tries his best to fail the love of his daughter and how does the young couple fight it all is what Uppena is all about.

Vaisshnav Tej’s performance is OK. Notwithstanding that he is a newcomer, he pulled off the role well. However, it is Krith Shetty who stole the show. Her beautiful looks, expressive eyes make youth fall for her. As an innocent girl she breathed life into Bebamma’s role. Krithi is going to make it big if she makes right choices. Vijay Sethupathi’s tall presence makes a huge impact. Sethupathi’s mass image comes in handy. He shoulders the film with the powerful role of Rayanam. The way he has portrayed the character elevated the film. His subtle yet dynamic show uplifts the film. The performances in Uppena have nothing to point out. Director Buchi managed to take out the performance from the cast.

Debutante director Buchi Babu is very fortunate that he has got all the resources to deliver a blockbuster with Uppena. He has nothing to complain about. He got the big budget, good cast, backing from mega compound, a strong production house like Mythri Movie Makers and a top director like Sukumar, ace music director like Devi Sri Prasad and most importantly, he got Vijay Sethupathi and his fan base. Yet the writing could have been better. This is where Buchi Babu should have worked upon well in the pre-production stage itself. Had it been worked out better, the film has a huge potential to make it huge. Yes, Sukumar was right when he said the film has a potential of reaping in Rs 100 Crore. But director Buchi Babu somehow doesn’t live up to it completely. However, it isn’t all bad. There are occasions where he had delivered. Buchi’s taking as director is good. The film is visually rich. Shot framing is good. Camera work deserves special mention. Devi Sri Prasad is the unsung hero behind Uppena who constantly shoulders the film through his background score. Naveen’s editing is alright.

Lag at portions
Early Second Half

Director Buchi Babu has chosen a familiar plot of a poor boy loving a rich girl. The plot has been done to death. From Titanic in Hollywood to several films in regional industry including Rangasthalam from the same team, had dealt with this point. However, Uppena has a different set-up and premise. That’s where it gets a different shade. Uppena deals with masculinity and what it truly means. That is where director Buchi and the team Uppena scored big. The film has the layer that shatters the gender stereotypes. The rich girl adjusts her lifestyle for her love. It is appreciable.

Director certainly took some cinematic liberties. Uppena misses out on some points. Rayanam’s strong desire for the shipyard should have been established better. It gets lost in the love track of the lead pair. If his daughter is missing twice, Rayanam’s response could have been dealt in a better way. Portions like keeping Bebamma’s run as a secret isn’t well conceived. Even the father-son emotion between Vaisshnav Tej and Sai Chand could be better though. There are some emotional scenes in the film that certainly bring tears. This is where director Buchi succeeded. Even the complicated point has been told convincingly.

Having said all, Uppena rides high on emotions with love at the centre stage. The end justifies the means. Bebamma and Rayanam’s emotional climax thugs heartstrings. It is a decent climax. On the whole, Uppena is watchable. Kudos to the producers for their gutsy attempt and spending lavishly on the newcomers. It is a different attempt and not run-of-the-mill film one gets to watch every Friday.