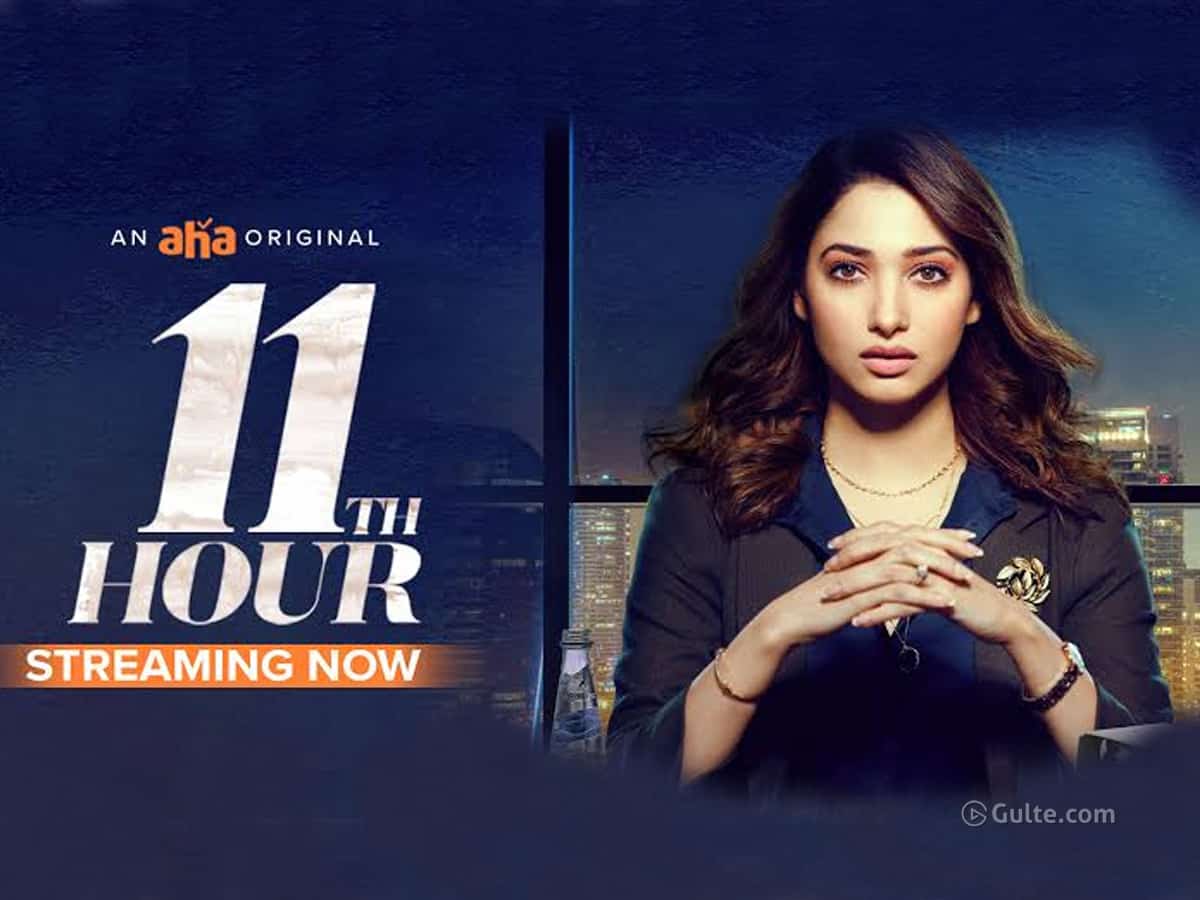 Tamannaah is the latest star actress to have forayed into the Telugu digital space. Her maiden Telugu webseries ’11th Hour’ is currently streaming on the exclusive Telugu OTT platform, Aha. The series has been directed by Garuda Vega fame Praveen Sattaru. The slickly cut trailer promised a riveting thriller set in the corporate world. Did the series succeed in meeting the expectations? Here’s our review.

Aratrika Reddy (Tamannaah) is the Chairman of Aditya Group of Companies. Since her childhood, her life has been a bed of thorns. She never received love from her patriarchal businessman father (Madhusudhan Rao) who often used to drink and abuse his wife (Pavithra Lokesh). Aratrika’s married life, too, is no different, as it ends on a tragic note after her husband Siddharth (Vamsi Krishna) cheats on her in front of her eyes. Aratrika’s mother and son Yash are the only two emotional links that bond her life together.

Amidst all these adversaries, the biggest conflict in Aratrika’s life is the future of Aditya Group and her dream to facilitate affordable and safe electricity across India through the AHNR technology. Using their political connections in New Delhi, Aratrika’s and her father’s age-old business rivals are on the prowl to snatch away her company. Aditya Groups’ assets will be liquidated if Aratrika fails to repay nearly Rs 10,000 crores to Imperial Bank by 8 AM the next morning. 11th Hour’s story is all about Aratrika’s desperate pursuit to save her company overnight.

Tamannaah as the determined boss lady Aratrika Reddy delivers one of her career’s best performances. Her character is layered with multiple shades and she aces them all quite comfortably. She displays Aratrika’s helplessness and confidence equally well. She also looks stylish and hot in those designer formals and liberally uses the f*** word several times.

All the lead actors come up with noteworthy performances. Arun Adith as Aratrika’s business school friend Peter, Shatru as the powerful businessman Rajyavardhan Rathore who is determined to end Adithya Group’s existence, Vamsi Krishna as Aratrika’s ex-husband Siddharth who offers to help her but with a motive, Jayaprakash as Jagannadh Reddy, a longtime friend of Aratrika’s dad and one of Aditya Group’s stakeholders, Anirudh Balaji as the egoistic Dubai prince Sheikh Sadiq together put up a compelling act to drive forward 11th Hour’s story.

Moody cinematography, rousing background score and the top-class production design deserve a major credit for making 11th Hour look rich, impactful and classy. In fact, 11th Hour ends up as the best webseries in the Telugu digital realm till date, thanks to the impressive production values. Aha must be commended for backing such a huge series.

Unfortunately, after arresting the viewer’s attention with a very promising premise in its first episode, 11th Hour falls flat in the later episodes due to a lethargic screenplay. Even though the story has a lot of drama, the narrative meanders in a past and present structure that dilutes the thrills to a great extent.

11th Hour has a solid premise, where a young and ambitious businesswoman passionately pursues her dreams and fearlessly faces the challenges in a corporate world full of shrewd and greedy men. In a way, the series can be seen as a tribute to the young women entrepreneurs in the world.

However, after perfectly setting up the main conflict in the very first episode, 11th Hour’s story moves forward at a snail-pace. The first episode prepares you for a riveting crime drama that’s going to unfold in the boardroom. But what follows until the 7th episode is just aimless narration that leaves you disappointed.

Even though the stakes involved are very high, none of the lead characters, including Aratrika, show the urgency to fulfill their motives. In fact, Aratrika, who is desperately trying to save her company before sunrise, hardly comes up with any proactive strategies and only keeps on waiting for some magic to happen. This makes her otherwise strongly written character lose depth and credibility.

Also, the unnecessary subplots involving Aratrika’s drug addicted brother and the kidnapper couple which lifts Aratrika’s son for ransom create no impact on the drama and only derail the overall progress and thus slowing down the story’s progress. And the resolution in the final episode is far too simplistic and cinematic, leaving you underwhelmed.

Even though it sounds cliched, the writer, director and the editor should have chosen a linear and chronological narrative structure to create a better impact. That way, the drama would have unfolded in a more impactful fashion and also all the lead characters would have evolved in an effective manner.

Bottom Line: A slow-burn thriller that burns your hours