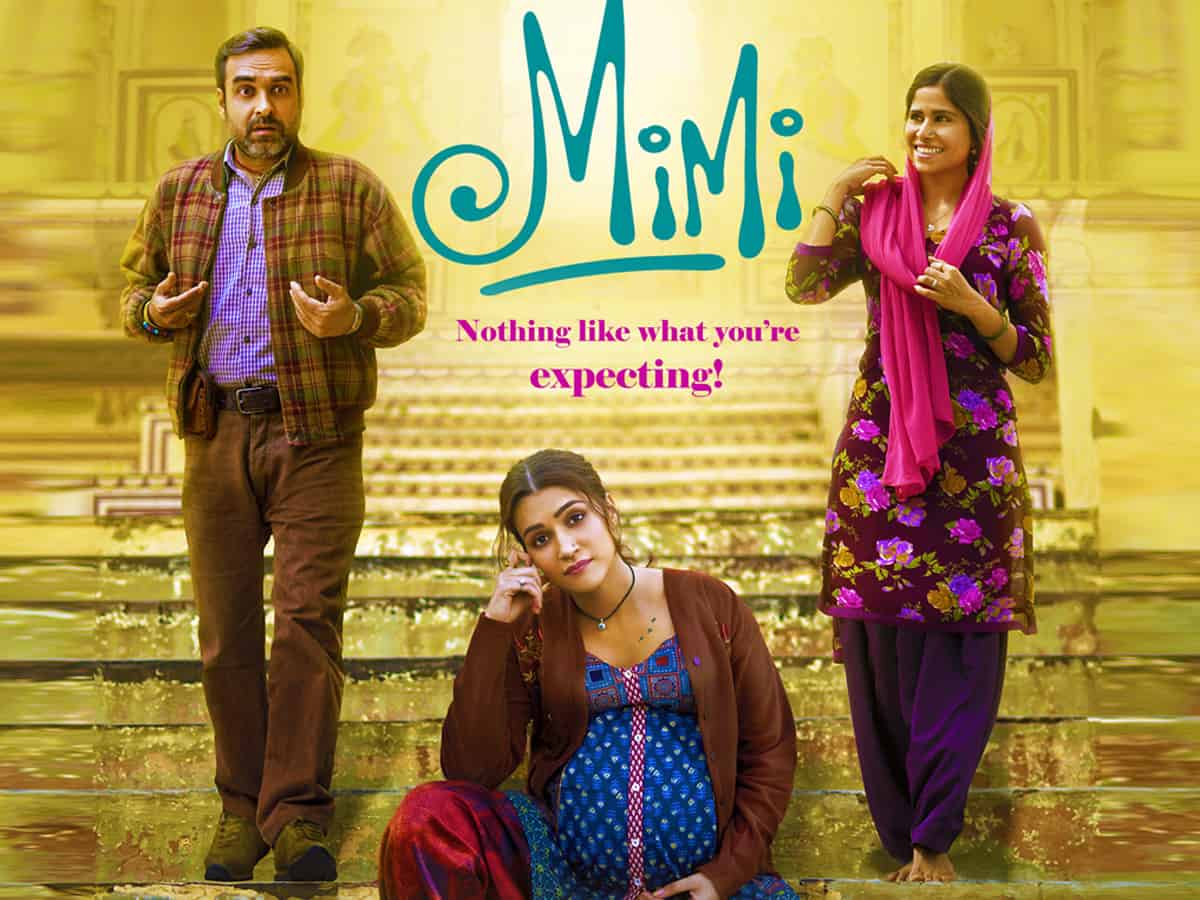 Streaming On : Netflix and Jio

Kriti Sanon, who debuted with Mahesh Babu’s Neokkadine has only done glam roles so far. For the first time, she is trying a female-oriented Hindi film called Mimi. The Netflix film also has award-winning actor Pankaj Tripathi and has been directed by Laxman Utekar.

Mimi is set in the small town of Rajasthan. A US-based couple looking for a surrogate mother to carry their child conveys the plan to their driver Bhanu(Pankaj Tripathi) who in turns promises them to find a perfect girl. One fine day, Bhanu spots Mimi(Kriti Sanon) a wanna-be actress, and lures her into becoming a surrogate. Mimi is offered 20 lakhs and she grabs the offer and gets pregnant. But as the yet-to-be-born child has some issues, the couple drops the plan and flies back to the US leaving Mimi in no man’s land. What problems does she face is the basic theme of Mimi?

Mimi is a career-defining film for Kriti Sanon and she makes full use of her character. She as Mimi starts on a carefree note and transforms into this single helpless mother in a beautiful manner. Kriti’s glamor, dances, and mostly her performance in the second half will surely bring teasers to the eyes. Pankaj Tripathi has become a pro in doing supporting roles. In Mimi, he plays Bhanu and is the main person who evokes comedy with his dialogues. Supriya Pathak as Kriti’s mom, Sai Tamhankar, Man Singh Rathore do their supporting roles perfectly and give depth to the film.

Director Laxman Utekar chooses a very contemporary subject and places it well in the native village of Rajasthan. Though films on surrogacy have come out in the past, Mimi has the perfect mix of fun and emotion. The film has music by AR Rahman but his magic is not created through the songs as only Param Sundari is good. The dialogues, native locales, and slick camerawork depict the mood of the film perfectly. The screenplay is what drives the film and there is no time wasted as the film does not have much lag with unnecessary deviations.

Mimi is a film that does not beat around the bush. It says what it wants to through its bold characters. Mimi played by Kriti Sanon wants to go to Mumbai and become a heroine. When she is offered 20 lakhs, she grabs it and turns into a surrogate mother. This process is conveyed in a fun and breezy manner. The first half of the film is kept light and Pankaj Tripathi’s character evokes good fun throughout.

Where Mimi scores big time is when the emotion is not missed even in the fun first half. The concept of surrogacy, how it is done, what are the legal aspects are brought in quote impressively. Things take a sharp turn in the second half where tragedy strikes for Kriti Sanon. Director Laxman should be appreciated as he brings the family drama into the forte and this carries the film on its own.

Kriti Sanon is alone and how her family and the supporting cast come to her rescue is shown so effectively. Even in such a time, the fun in the film is kept intact. The pre-climax has solid emotional moments between the mother and son and one would think that the ending would also be solid. But the director ends the film with a simple conclusion. Barring this, Mimi ticks most of the boxes right and makes up for a clean family entertainer.