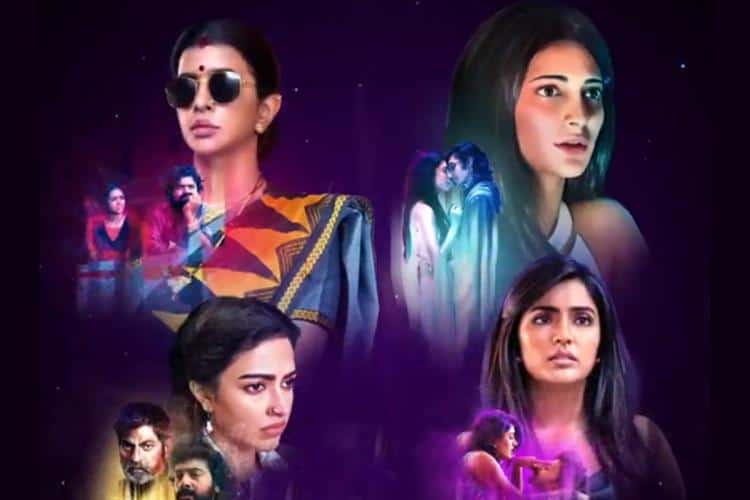 Pitta Kathalu, the first Netflix original in Telugu has got very talented directors and actors on board. The four anthologies, each with a different genre have one theme in common, Woman. In these short stories, we will get to see the women who get what they want in the ways better known to them, for good or for bad.

The directors tried to show us the characters we come across every day to the life which could be seen in decades ahead, the realistic happenings behind the doors to the dark truths in many people’s lives, through these stories. Let us give a glance at what the stories are about and how the famous feature film directors narrated what they wanted to in little more than 35 minutes for each story.

Directed by Tharun Bhascker, Ramula is one rustic story that elevates the love, lust, and prejudiced lives of three.

Swaroopakka (Manchu Lakshmi) is a discontented politician looking for one proper chance to put herself in a better position. Ramula (Saanve) is in love with Ex-MLA’s Bandi Ravanna’s son Ram Chander (Abhay Bethaganti), an irresponsible brat. How a scuffle between the so-called lovers changes their lives to extremes and what Swaroopakka does in that forms the story.

Manchu Lakshmi did well as Swaroopakka. Be it her accent, makeover or attitude of a seasoned yet disgruntled local political leader, Manchu Lakshmi did a good job. Saanve is natural, while Abhay Bethaganti (Naveen) steals the whole show easily. His scenes with his father and the simple conversations are neat and laugh evoking. Others are decent in their roles.

Tharun Bhascker once again proved his knack for handling a natural story in the rustic background this time. His choice of actors and the way he established the characters worth a pat. His treatment of the characters and the simple yet attention-drawing lines of Swaroopakka when she takes Ramula as her protege is too impressive. The background music like Old Turkey Buzzard holds a good grip with the visuals, especially when for Swaroopakka’s character.

Nandini Reddy directed this story of a resentful and insecure husband who gets tactfully driven to what he deserved.

Meera (Amala Paul) is an upcoming writer, mother of two, struggling in her married life due to Vishwa (Jagapathi Babu), a possessive, jealous, suspecting, supervising, and what not husband. His insecurity and suspective nature drive him crazy, while the glam queen wife and the flirting neighbors add up to his aggression. His constant doubting pushes him to believe that his wife is having an affair with his best friend. How his doubts made him do a blunder and how his wife deals with it are all about ‘Meera.’

Appearing as a dubious and problematic husband, is a cakewalk for Jagapathi Babu, thanks to the edge he got with the grey-shaded roles he is already doing in the feature films. Amala Paul did her role all subtle and did just what is needed for the role to work, which included bold scenes as well. She looked beautiful. The boyfriend actor who played Shiva, friends Kireeti, Sunayana, and Vamsi did just okay in their roles and at times artificial too. Pragathi is also fine as a police officer.

Nandini Reddy picked a line of a helpless wife, begrudging husband, and how the former deals with the latter. The director is able to convey the point on how the wife managed to get over the rage, emptiness, and fear using lust, betrayal, and desire. Nandini Reddy dealt with the story well and the twist, in the end, is also good. While Meera’s role was shown well, Vishwa’s role could have been a little toned down from being too noisy and unsubtle.

Vik, Vikram Ramaswamy (Sanjith Hegde) a young entrepreneur develops X-life, the world’s most advanced virtual reality and he managed to build a large userbase with just data as his weapon. He uses emotions, anxiety and many of those sort as data points to control the lives and keeps sticking people in the virtual world. An old friend and a coder disrupt the X-life to keep the love alive in the real world where life in Ex-life is a trap. How Vik tastes his own medicine when he loves Divya (Shruti Haasan) and after he ignores the warnings about his X-life destroying the love, is the story here.

Sanjith Hegde looked good as the arrogant tech entrepreneur. Shruti Haasan was just okay in her role. Anish Kuruvilla appears in a weird look just to appear like a man in the advanced world. Others did okay in their roles. The setup of the whole plot was made to look like a swanky and futuristic background, but it ended up as just a room of neon signs.

Nag Ashwin’s idea to present how the virtual world is controlling the emotions in real life and how people are slipping into the non-real world with tech devices in hand, is commendable. With the plot nothing new and the characters far from being natural, the directors could have used more ‘data points’ aka soft spots to make it more interesting for the audience.

Ghazi director Sankalp Reddy came up with a story of an extramarital affair that confronts four lives proving love is eternal and so is desire.

Pinky aka Priyanka (Eesha Rebba) is an adamant woman who insists on staying in touch with an affair with novelist Vivek Panigrahi (Satya Dev). Vivek’s wife Indu (Ashima Narwal) wants to go to Germany on a dream project and she wants her husband to come along. Pinky is against this move while she could not get along well with her husband Harsha (Avasarala) in a forced marriage. How the very desperate Pinky tries to stop Vivek from leaving and how the bomb she drops puts a pause and a question mark in all the four lives, is the story.

Eesha Rebba is fine as Pinky, with the stubbornness and the attitude. Her uncompromising character is shown well and it looked better with Satya Dev and Avasarala reciprocating well in their respective roles. Satya Dev is a natural and so is Avasarala who could get into the skin of any character with ease. Ashima Narwal is looking good and fine in her role.

Sankalp’s story of a compelled marriage and an illicit affair influencing each other is narrated well. With the very talented actors he already worked with, like Satya Dev and Avasarala, Sankalp’s work becomes easy to give us this tale. The director leaves us cliff-hanging with the poor climax, which could have been better.

The title animation has an interesting fable in itself. A woman inducing fire in the hearts of a young couple but puts it down after she is done playing puppets with them. Well, that could be related to each story of Pitta Kathalu.