Mood Of The Nation: ‘Dislikes’ Modi? 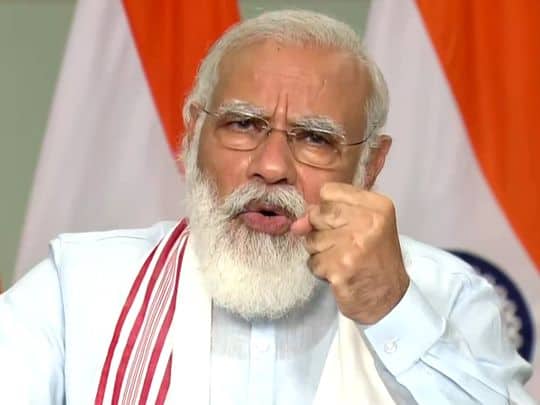 Prime Minister Narendra Modi is one among the most tech-savvy leaders in the world.

All his handles on various social media platforms have lakhs of subscribers as he is known for his engaging lectures. Modi is not only on the mainstream sites such as Facebook, Twitter, YouTube and Instagram but also has presence on Discovery network Stumbleupon, professional networking site LinkedIn, visual social network Pinterest, blogging site Tumblr and vernacular-language social network ShareChat.

However, his latest ‘Mann ki baat’, the 68th edition of the monthly radio show, has rubbed the people, specially the youth, on the wrong side and there is a deluge of Dislikes.

The students had moved the Supreme Court seeking postponement of JEE/NEET exams in the wake of Covid-19 pandemic but the court directed that the exams should be held as per schedule which evoked a lot of negative response highlighting the anger of the JEE/NEET aspirants.

This episode of the PM’s show became one of the most “disliked” videos on the party’s official YouTube channel. The BJP, however, dismissed the huge number of dislikes as part of a digital campaign by political opponents on the exam issue.

After August 30, all the official handles of the PM on various social media platforms garnered the most Dislikes and the comment boxes were full of suggestions asking the PM to focus on restoring the lost jobs, alleviating poverty and also to speak about cut in salaries, an after-effect of the pandemic.

It has been six months since the country has been pushed into the pandemic-induced crisis and migrant labourers, marginalised and economically weaker sections of the society have been facing the brunt of it without proper employment.

Modi has a strong follower base on all the social media platforms that even USA President Donald Trump envied.

On Twitter, Modi has the third-highest number of followers of any politician, next only to former US president Barack Obama and his successor Donald Trump.

It is not just others following him on Twitter, Modi also follows some 2,000-odd ordinary citizens who strengthen his reach by replying, retweeting and sharing his posts. Early this year, Modi was reportedly having 53 million followers.

Modi has significant presence on Facebook too. His verified page is the 79th most-liked and 62nd most talked-about, according to Social Blade.

Modi on his personal YouTube channel, clocked more than 536 million total views on more than 12,000 uploads.

Amidst the elation, Modi addressed the nation again through ‘Mann ki baat’ on August 30 and the lecture turned things topsy-turvy.

As many as 56 lakh people viewed the programme on the BJP’s official YouTube channel and his speech garnered over 3,03,000 Likes and more than 10,00,000 Dislikes, the difference between likes and dislikes running up to 350 per cent.

On Narendra Modi’s personal YouTube channel over 19 lakh viewed the speech and it garnered 1,81,000 Likes and 2,75,000 Dislikes, the difference accounting to 50 per cent.

On the PMO-India YouTube channel, as many as 17 lakh people viewed the video and it got a meagre 84,000 Likes while garnering 1,78,000 Dislikes, registering 100% difference between Likes and Dislikes.

However, the comments sections on all these channels had some worthwhile questions and suggestions from the public.

The viewers said: “Jobs are lost, poverty has increased, salaries are cut. Please speak on those issues and take remedial action.”

Hence, the Prime Minister should understand that all talk and no action or playing with the feelings of people would only makes them dislike him. There is buzz that the public in the country are not happy with his inept handling of the Corona crisis. Shortage of PPE kits, gloves, oxygen beds have led to more infections and in many cases, even ended up in death of the patients.

This apart, the youth are also angry over lack of employment opportunities with the economy remaining in the recession from even before the outbreak of Covid-19 pandemic.

The simmering discontentment reached a breaking point with the apex court’s verdict on JEE/NEET exam.